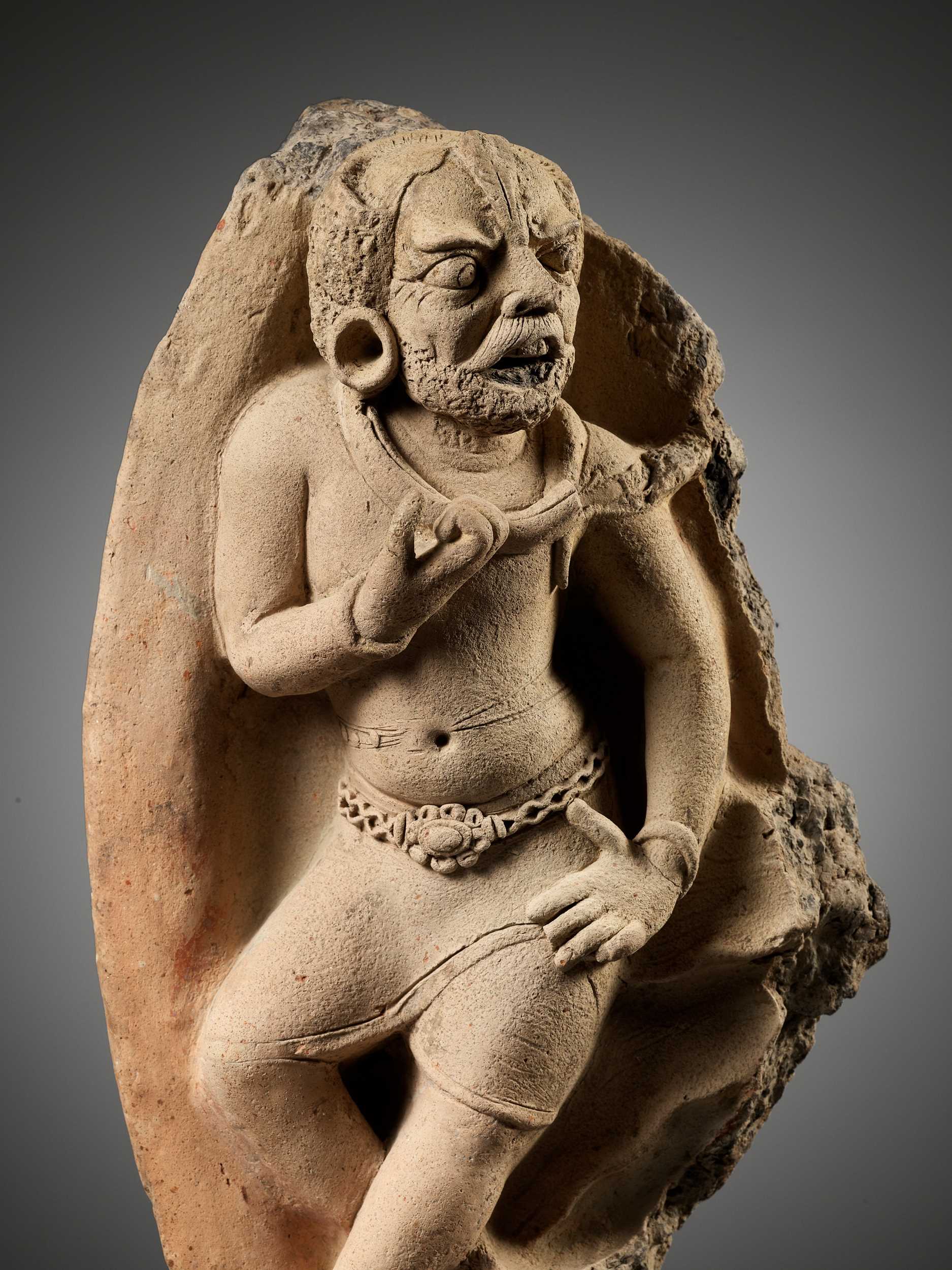 
Eastern India, Bengal, 5th-6th century. Powerfully modeled, the asura standing in a dynamic pose with one leg crossed over the other, his face with a confident expression, perhaps mocking an unseen opponent, marked by his bulging wild eyes and the open mouth showing teeth, framed by a thick beard. He is wearing a short robe secured at the waist by a floral belt and adorned with jewelry.

Provenance: From a notable collector in London, United Kingdom.
Condition: Excellent condition, commensurate with age. Extensive wear, losses, signs of weathering and erosion, encrustations, few structural cracks.
Scientific Analysis Report: A thermoluminescence analysis report issued by Oxford Authentication on 14 September 2020, based on sample number C120e27, sets the firing date of one sample taken at between 900 and 1500 years ago. A copy of the report, issued by Oxford Authentication, accompanies this lot.
Academic Dossier: A detailed academic commentary on the present lot, elaborating on the meaning of the Asuras as well as the history of the Gupta Empire in general, and showing many comparisons to examples in both public and private collections, is available upon request. For a PDF copy of this dossier, please refer to the department.

With an acrylic glass mounting at the back and an associated metal stand. (2)

The lively figure depicted in this terracotta fragment is probably an Asura, one of a group of gods who opposed but were ultimately defeated by the Devas, the gods who are central to Hindu and earlier Vedic beliefs; it is quite likely that the myths relating to the Devas and Asuras evolved from a single belief system. The legendary conflict may be based on a factual clash between two sects that existed in the post-Harappan period, when beliefs surrounding the Vedic gods and their associated social structure were challenged by revised ideas emanating from Iran, which ultimately died out or were driven away by the existing mainstream hierarchy in western India.

Terracotta was the traditional material for religious images in the Ganges Valley and in the Mauryan and Shunga periods (3rd-1st century BC). Bengal had been the source of some of the most sophisticated figures of gods and goddesses. In the Gupta period, several centers of terracotta sculpture emerged across the Empire, from Akhnur in Kashmir, down to Shravasti and Bitargaon in Uttar Pradesh, around the Gupta capital at Pataliputra (Patna), and down into the Ganges Delta where some of the richest red clays were available. The lack of stone in eastern Bihar and Bengal meant that clay had always been used for architectural purposes, brick adorned with terracotta or stucco being the most widely used material, and a number of archaeological sites in Bengal attest to the sophistication of the effects achieved.