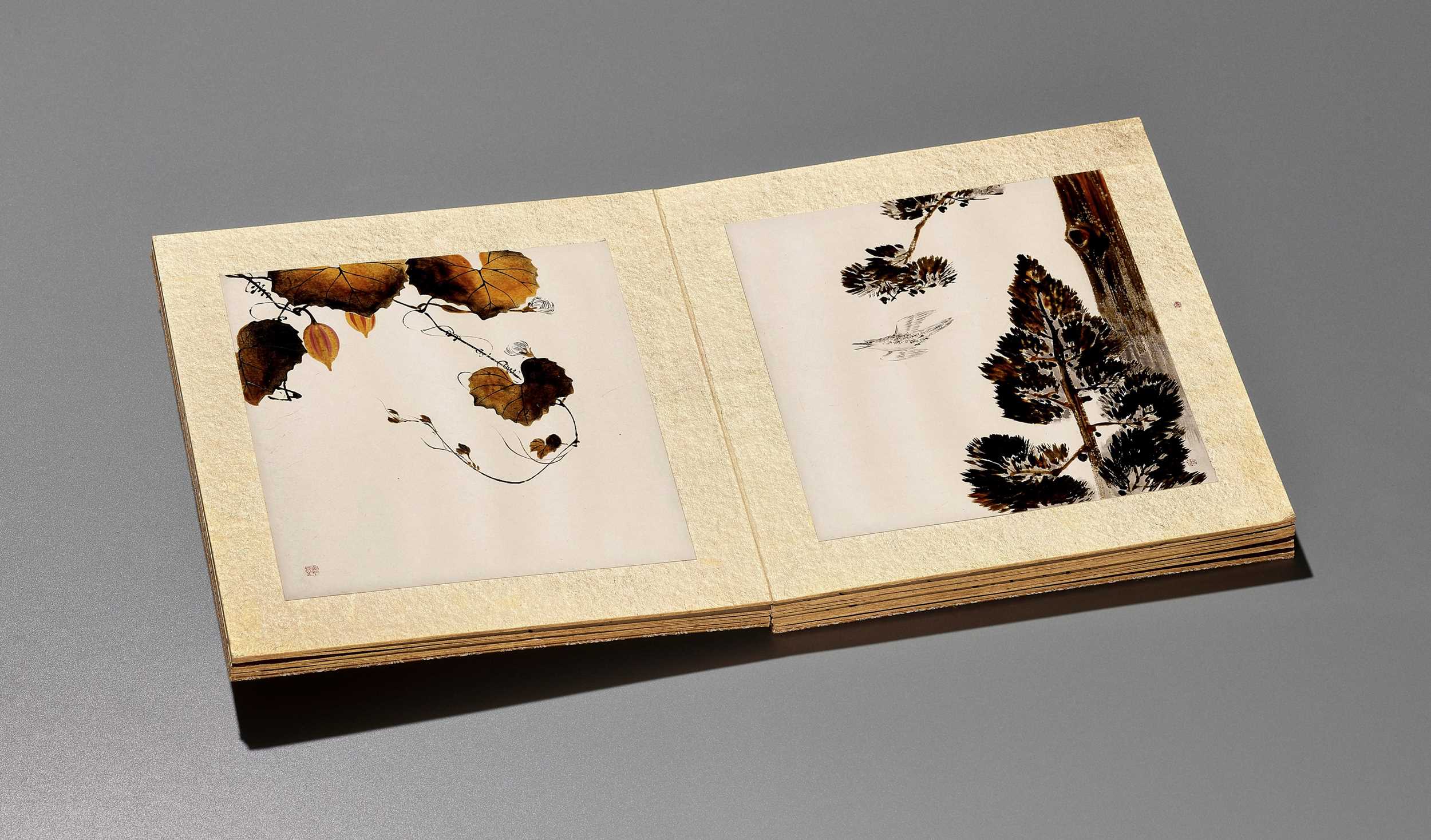 The fourteen paintings mounted as an accordion album on gold paper with silk brocade cover and back, superbly painted with lacquer on paper, with subtle use of ink and watercolors, to depict various subjects: a gushing waterfall, cleverly indicated with subtle linework and negative space, the craggy rockwork finely painted with hues ranging from ochre-brown to gray-black; two reishi mushrooms growing from craggy and grassy rockwork, the fungi appealingly variegating in color from a deep dark-brown to a pale gray; a blossoming prunus tree, with only a part of the trunk and few branches and blossoms visible; a shoreside mountain landscape lined with trees above a path with three figures walking along it; two pine saplings with brown-lacquered trunks and dark leaves; a spray of bamboo leaves as well as three bamboo stalks, which are mostly off-image and lacquered a lustrous brownish-black; a particularly lustrous black-lacquered nazume (eggplant) and kaki (persimmon); a cluster of lotus leaves, zuiki (leaf stalks of hasuimo or lotus yam) and chrysanthemum, clearly painted in the form of a stylized crab with prominent pincers; a magpie in flight amid thickly grown pines, with the use of silver and dark-brown lacquers creating a striking contrast; two small gourds borne on wispy vines with large leaves, the veins finely painted in black lacquer; another prunus tree with thin branches and vines bearing neatly veined leaves and lavender-pink blossoms and bud; a garden with yellow chrysanthemums, bamboo, and dark weeds; a flock of plovers flying low above crashing waves with boldly painted sea foam; and blossoming camellia with finely veined brown leaves borne on a young branch, the trunk mostly off-image.

Each leaf is signed KOMA or TAISHIN to the lower right corner.

Ikeda Taishin (1825-1903) was the leading pupil of Shibata Zeshin who worked in the Meiji period. He was born in Edo and became Zeshin’s first lacquer apprentice in 1835 at the age of eleven. He became an independent artist around 1870, approximately 35 years later. Together with Kawanobe Itcho (Genjiro; 1830-1910), Taishin was appointed an Artist to the Imperial Household (Teishitsu gigeiin) in 1896. His pupils included Umezawa Ryushin, a member of the Art committee of the Imperial Fine Arts Academy and the Imperial Household.

Auction comparison:
A closely related album by Shibata Zeshin and his pupils of smaller size and with only twelve leaves, some sealed Koma, was sold at Christie’s, An Inquiring Mind: American Collecting of Japanese and Korean Art, 15 April 2016, New York, lot 51 (sold for 47,500 USD).