Masterful Contemporary Netsuke Up for Auction

The demand and prices for contemporary netsuke continue to rise, and we're delighted to offer an exceptionally fine selection in our November Fine Netsuke & Sagemono auction.

The demand and prices for contemporary netsuke continue to rise, and we're delighted to offer an exceptionally fine selection in our upcoming Fine Netsuke & Sagemono auction, taking place on 4 November 2022. Many come from the collection of Gabor Orszagh.

Orszagh is a passionate collector with a keen eye for contemporary netsuke of exceptional quality. His collection includes works created by some of the most outstanding contemporary netsuke carvers, such as Ikku, Kenji, and Hideyuki. Several have been published and exhibited.

The star of our catalog cover is superbly carved from a branch of stag antler, giving the triumphant bat a remarkable three-dimensionality. 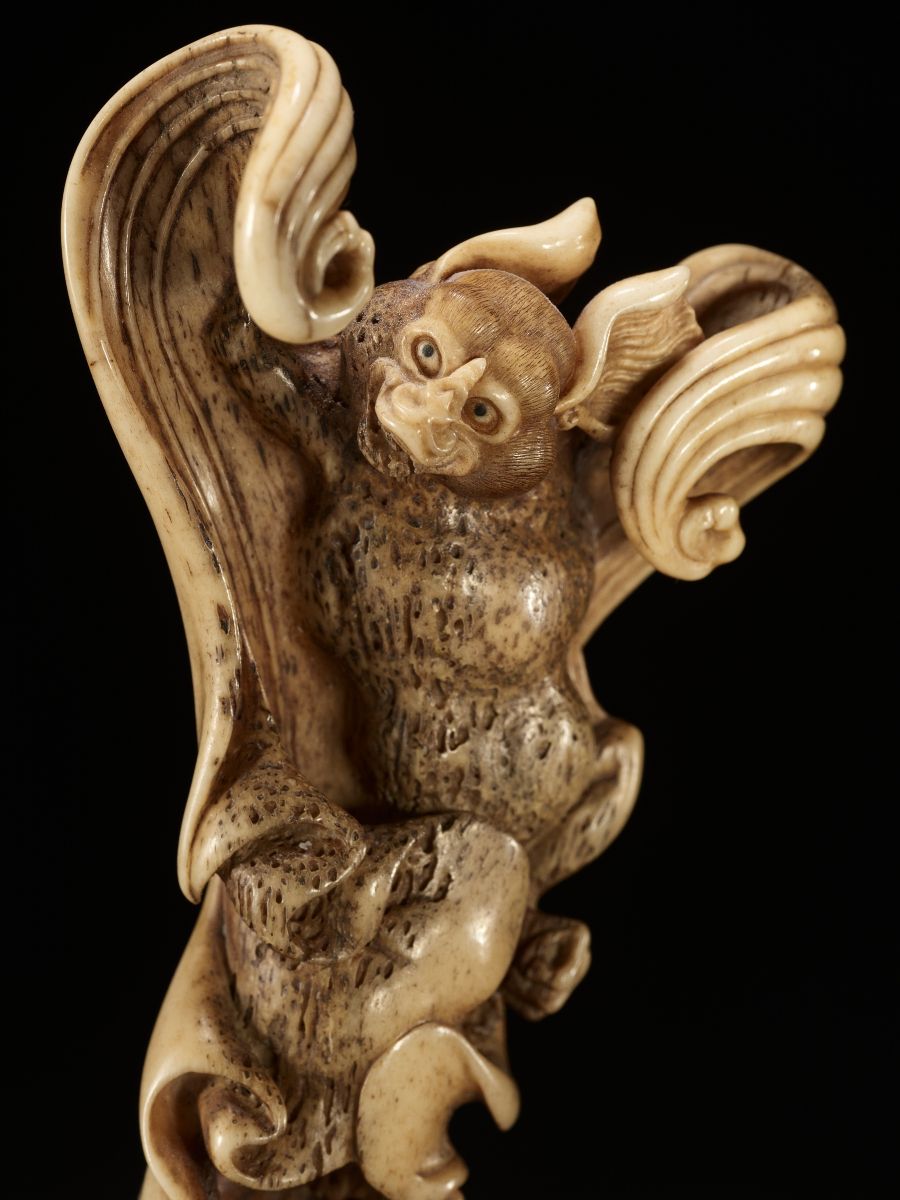 Like several of the contemporary netsuke in this sale, this masterwork was included in Michael Spindel Ltd.'s 1991 publication, An Exhibition of Contemporary Netsuke.

Isamu Kasuya (Ikku, born 1949) is widely regarded as one of the most renowned netsuke carvers of the 20th century. His output is fairly limited, and he preferred to never repeat subjects. He studied under the master carver Yasafusa Saito.

Lot 152: HIDEYUKI: A SUPERB WOOD NETSUKE OF KIKUJIDO AND BAKU

Next is a netsuke by Kosei Hideyuki has been exhibited and published. It depicts the chrysanthemum boy Kikujido slumbering and leaning against a baku, who is presumably about to devour the boy's nightmares. 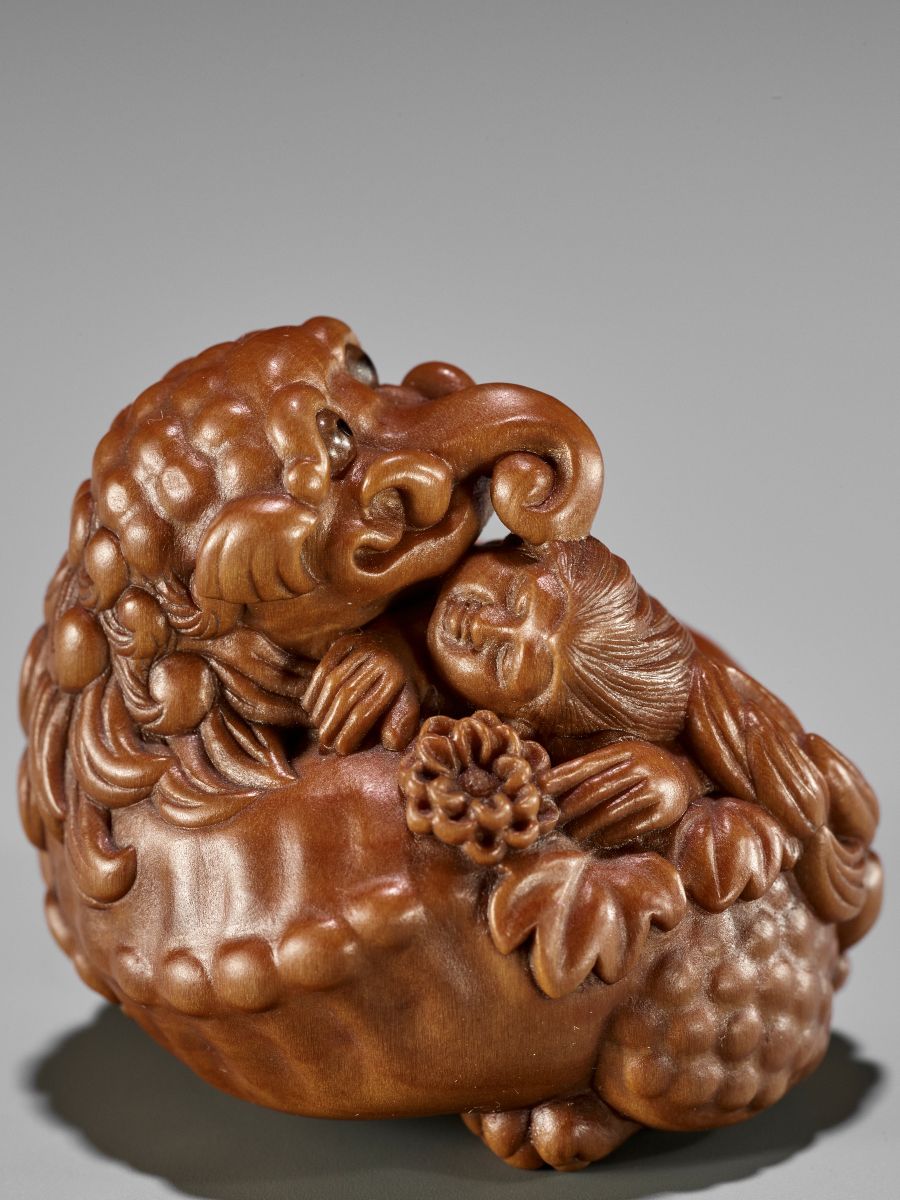 Miriam Kinsey, arguably THE authority on 20th-century contemporary netsuke, notes that Hideyuki's netsuke "are executed with his own original ideas and with delicate, detailed, and meticulous workmanship." 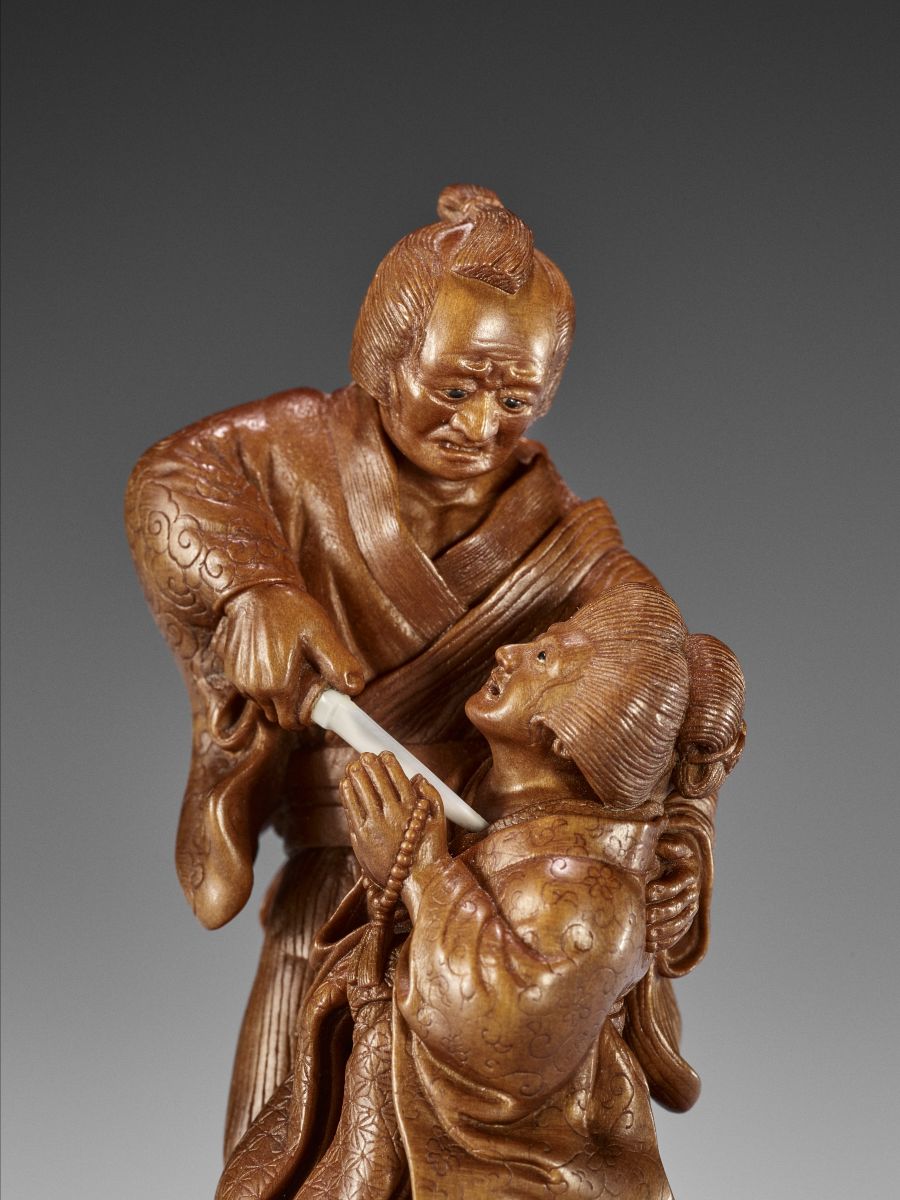 His preferred material is wood, often embellished with intricate inlays. Meikei is primarily known for his dramatic scenes of lesser-known legends, plays, and novels.

This netsuke depicts an iconic scene from The Love Suicides at Sonezaki, Chikamatsu's most famous play. It was an instant hit upon its release in 1703 and has since been adapted into kabuki, movies, and comic books. 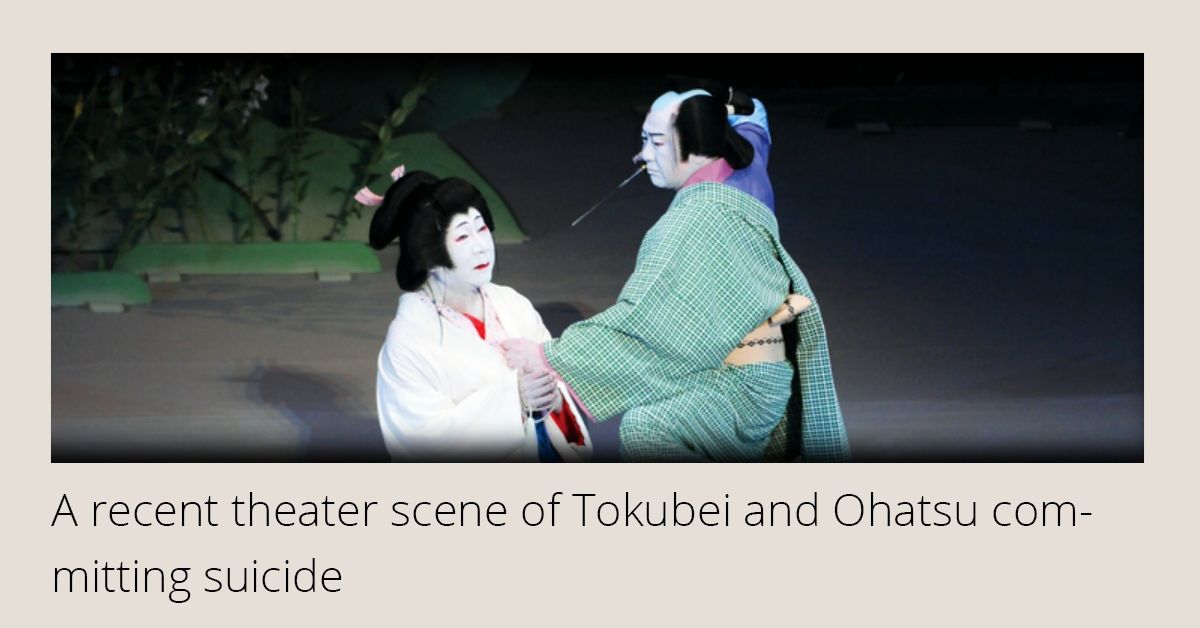 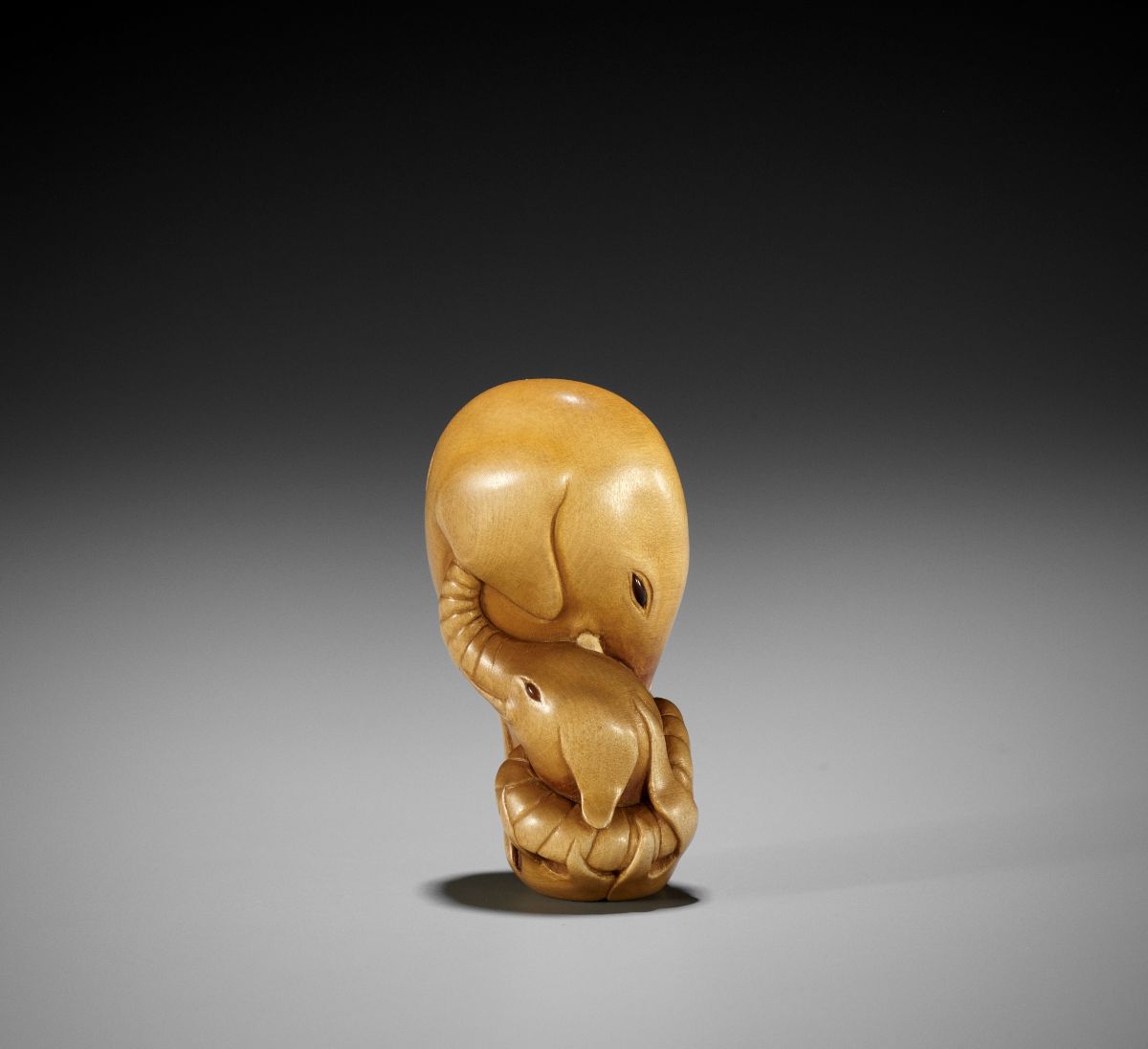 "In Baku Madonna and Child I portray another private scene of the mythological baku – that of a baku mother cuddling her child. Both mother and child have been carved in an economical style for a specific reason. The problem I set myself was to capture a feeling of great tenderness and compassion between the two while at the same time expressing the essentially aggressive nature of this mythological creature. After all, baku prey upon the most terrifying of phenomena, our own deepest fears and the horrors that lurk in our subconscious. They are lapped by flames of the spirit world and bathed in the love for each other. The pose reminds me of the carvings of the Madonna and Child, hence the title, a meeting of eastern and western philosophies."

Lot 164: KENJI: A FINE CONTEMPORARY WOOD NETSUKE OF A BAT WITH YOUNG

This dynamic netsuke is in excellent condition. 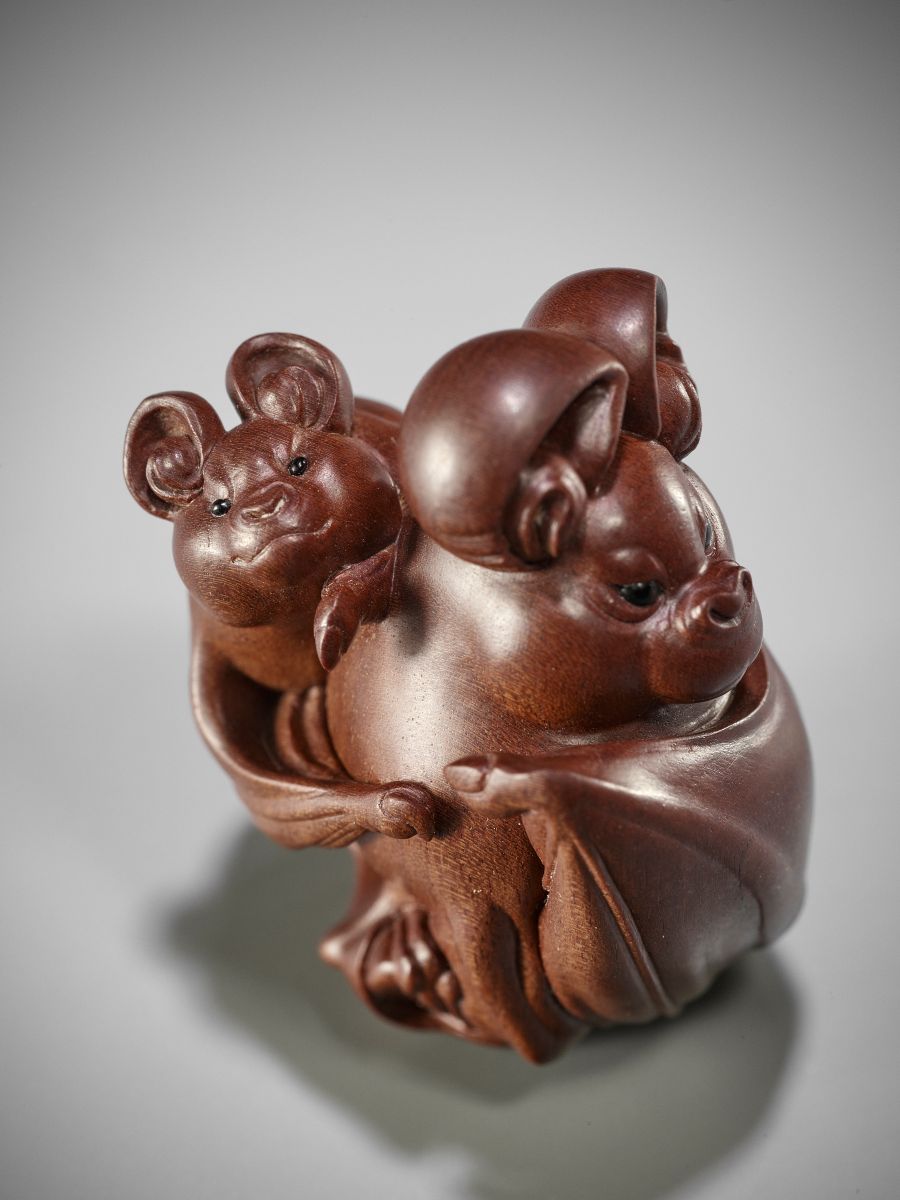 Kenji Abe (born 1947) learned carving from his father, Godo. He is versatile in any subject matter and material and is a member of the International Netsuke Carvers Association. His works are, amongst others, in the collection of HIH Prince Takamado (1954-2002).

MICHAEL BIRCH: TRUST ME (EVEN MOTIVATED GHOSTS DO IT)

Last but not least is a netsuke from Michael Birch's "Trust Me" series, which has been published, exhibited, and illustrated. 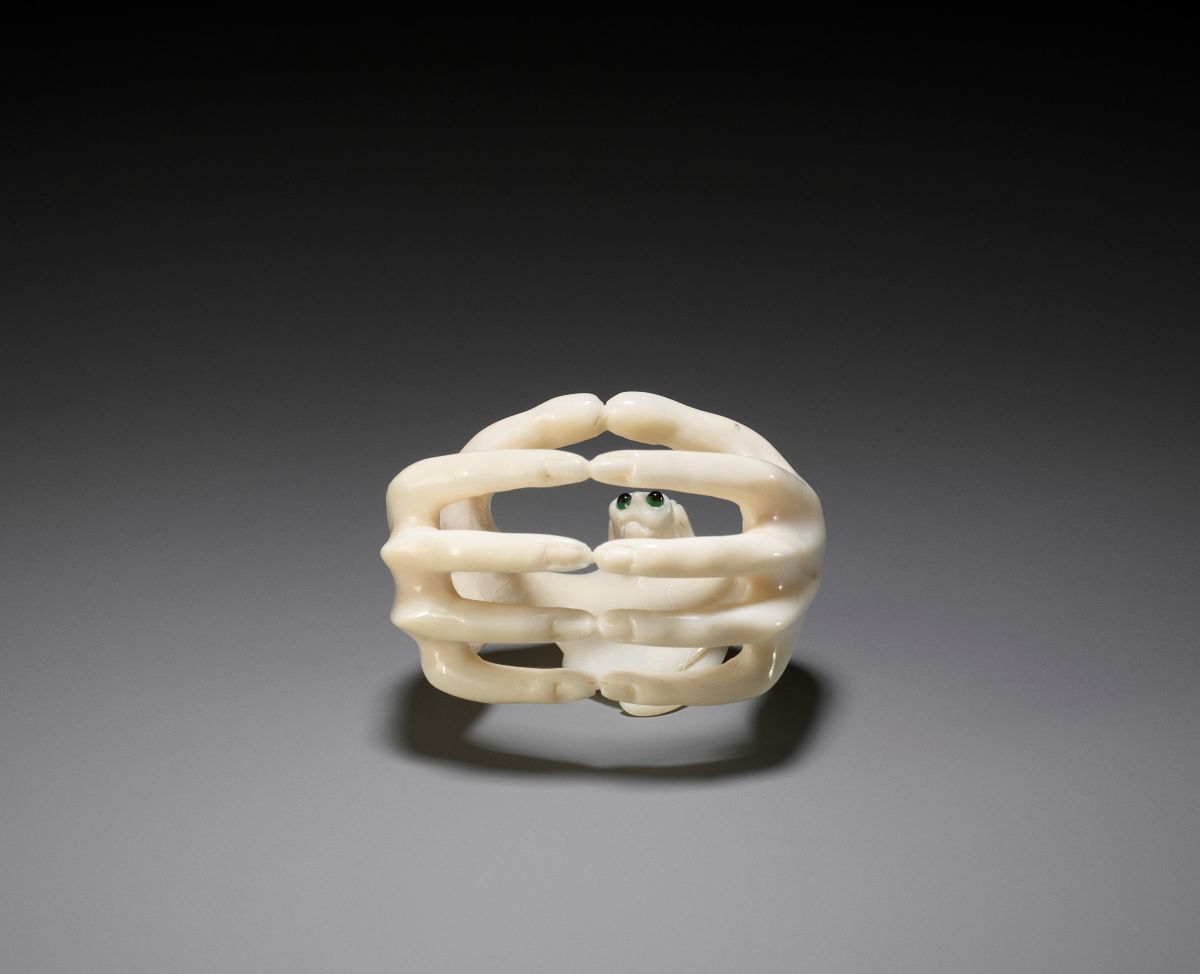 "Examples of wide-spread unconscious body language, a gesture frequently displayed by persons instinctively desiring to appear sincere, trustworthy, knowledgeable, relaxed, self-assured, unemotional and, among other things, at ease with the world. Alternatively, it can be a useful means of parking one’s hands in a neutral for a brief period, until they can be put to better use as an animated accompaniment to speech."

"Michael Birch netsuke pieces of “Trust me” are a strong statement of deep thinking of the artist. Many netsuke artists display their skill of carving and talent as true artists in the work that they produce. Michael does much more, he expresses his sense of humor as well as his deep thought into the science of body language."