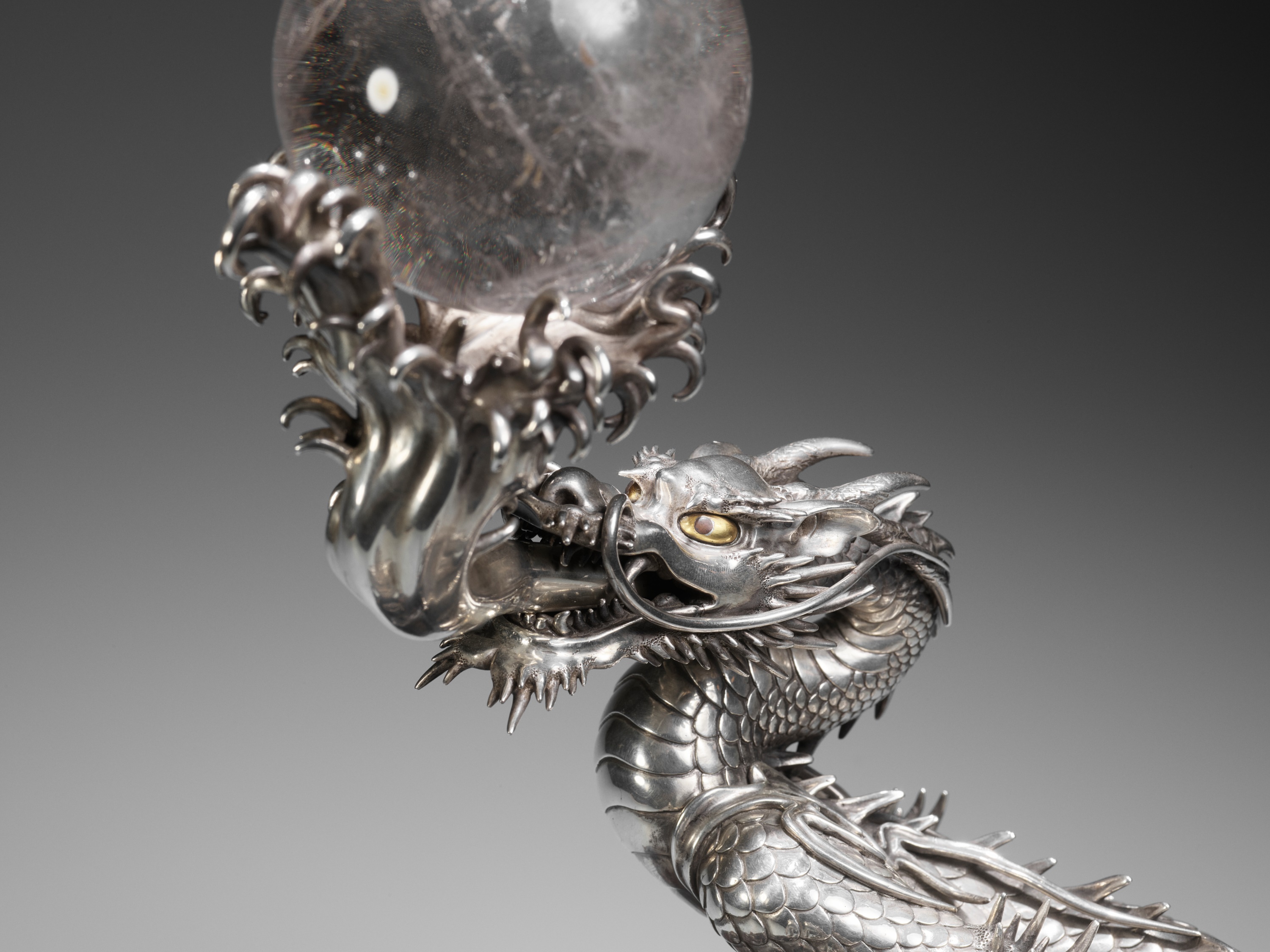 Up for Auction: Japanese Imperial Metalwork

We're shining a light on an exceptional selection of Japanese imperial metalwork in our upcoming Fine Japanese Art auction. These treasures span a wide range of themes, from mythical dragons and heroes to naturalistic trees and birds.

This December, Galerie Zacke is delighted to present extraordinary metalwork from some of the most renowned Meiji period artists and companies, including Takasaki Koichi, Gyokuryuken Sanmi, the Nogawa Company, and the Miyao Company. 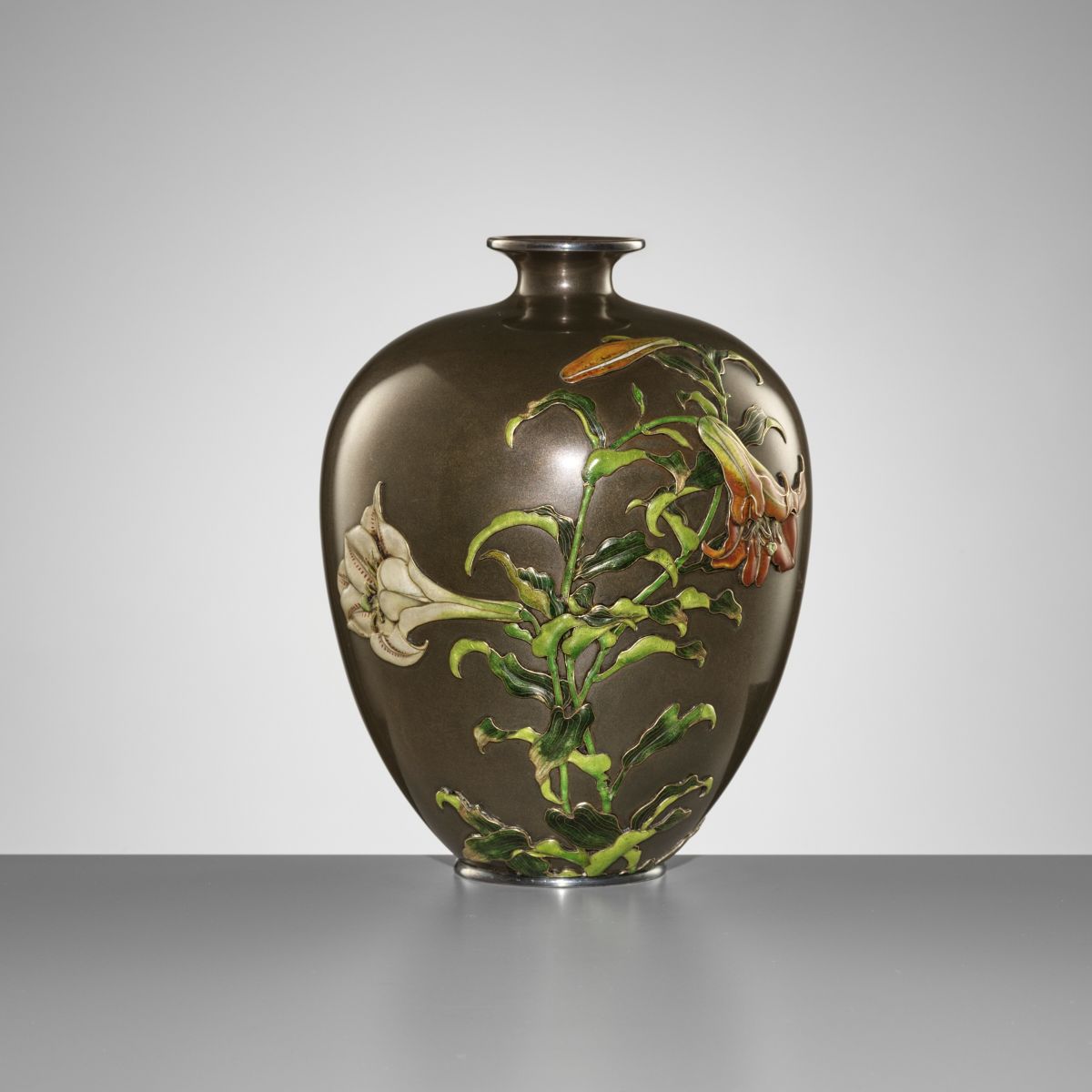 Despite Koichi's acclaim, only a few of his pieces are known to exist today. 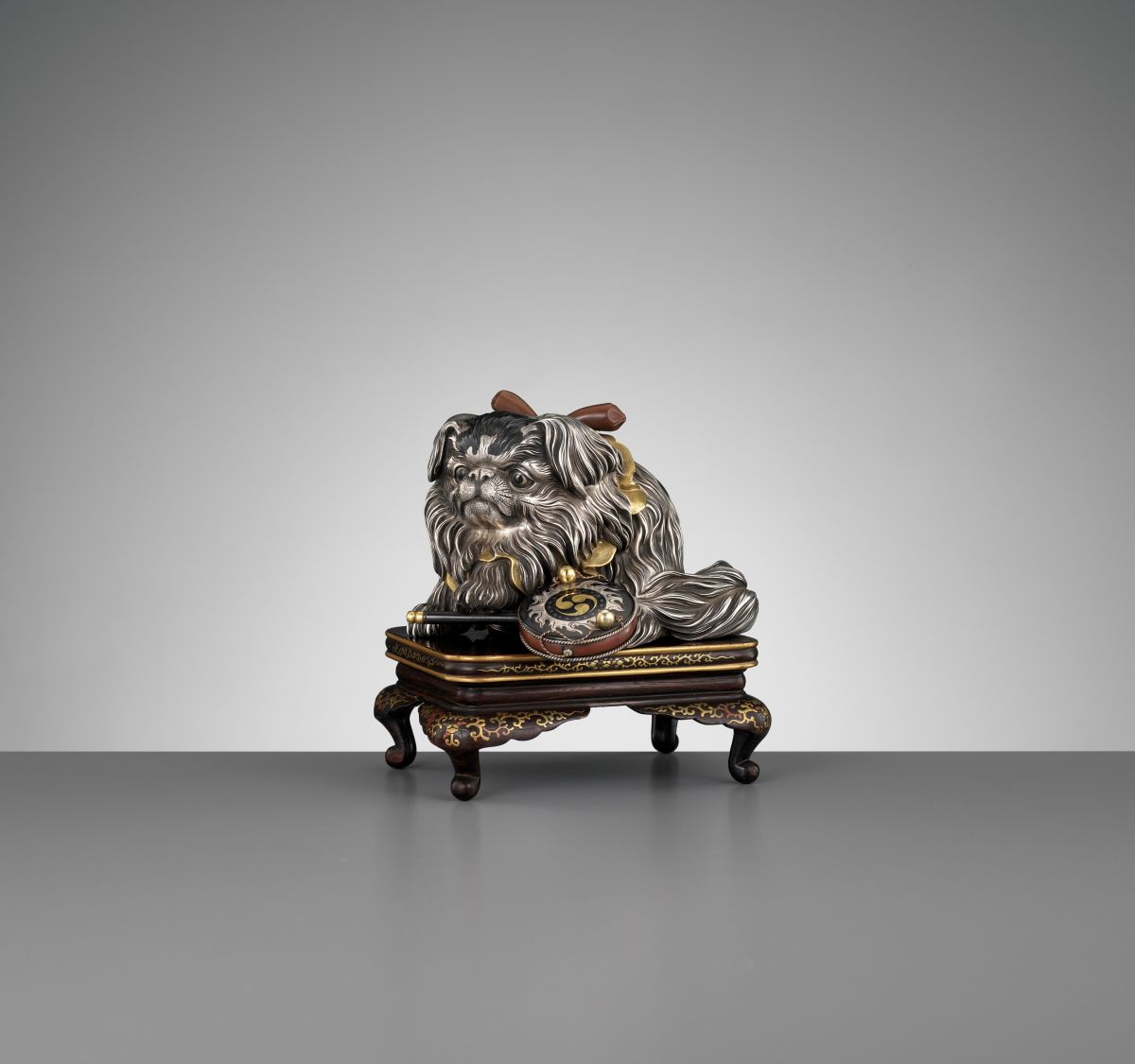 This superb, ingenious, and irresistable silver okimono depicts an obediant Japanese Chin puppy. Japanese nobility cherished this breed, and it's said the spot on their forehead is associated with the touch of Buddha.

Lot 54: SANMI: A MASTERFUL SILVER OKIMONO OF A DRAGON WITH ROCK CRYSTAL SPHERE 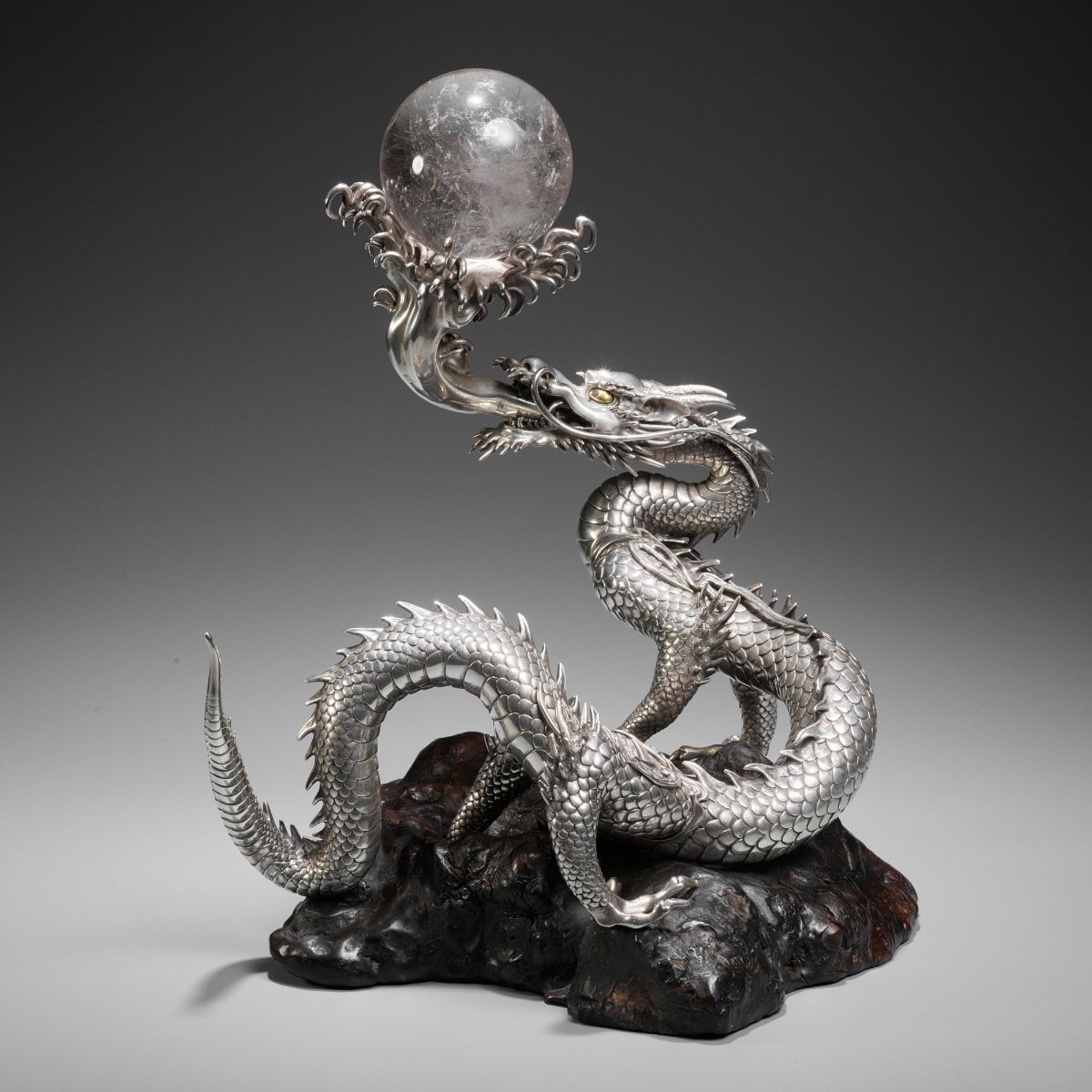 Lot 54 is one of the star lots in the sale, a powerful and ferocious okimono of a dragon. Gyokuryuken Sanmi (Kazumi) was an exceptional artist renowned for his masterful silver metalwork during the Meiji emperor's reign.

The Nogawa and Miyao Companies

Lot 61: KOITSU FOR THE NOGAWA COMPANY: A SUPERB AND LARGE INLAID BRONZE VASE DEPICTING A GOJUNOTO PAGODA IN SPRING 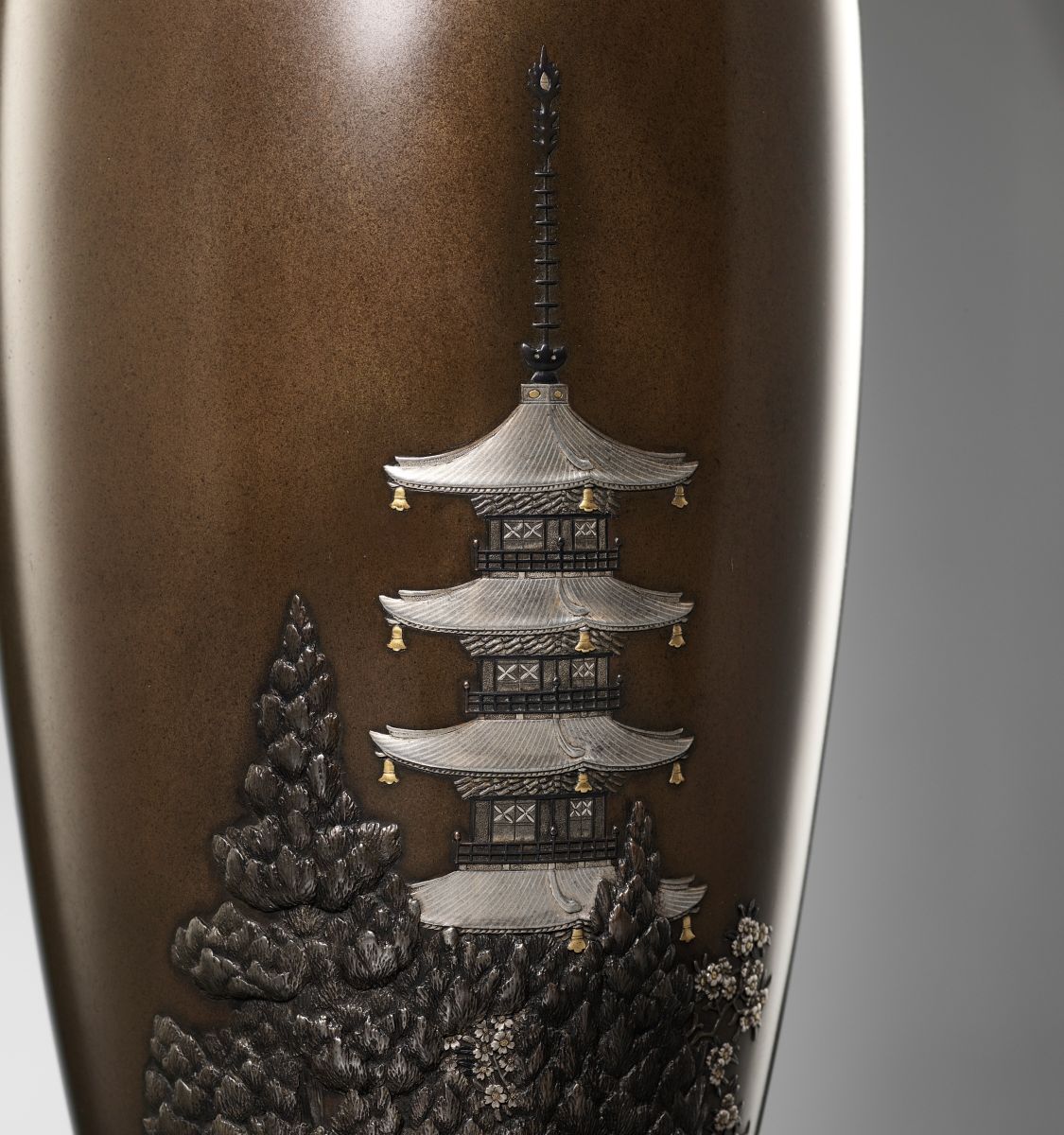 Lot 62: OTSUEI FOR THE NOGAWA COMPANY: A MASTERFUL INLAID BRONZE VASE DEPICTING A SPIDER HANGING FROM A PLUM BRANCH 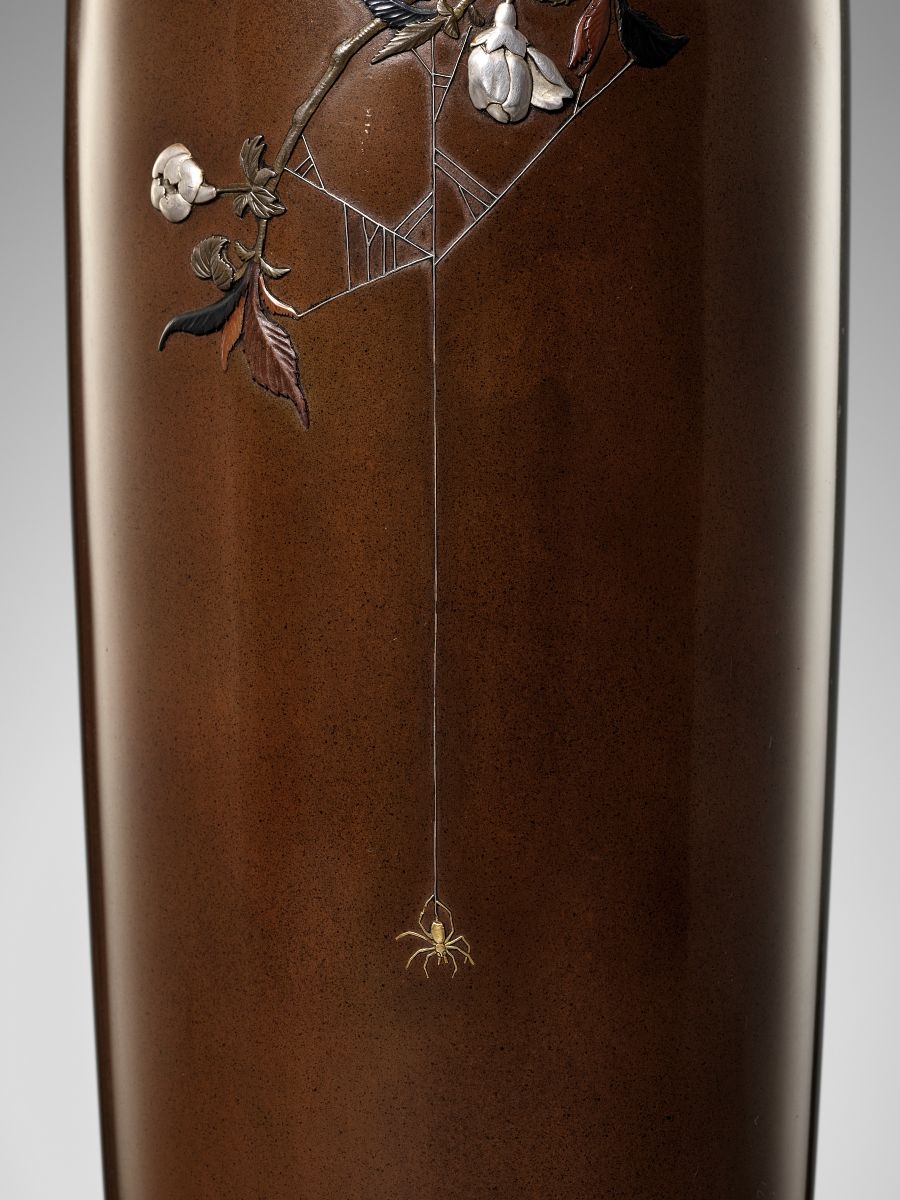 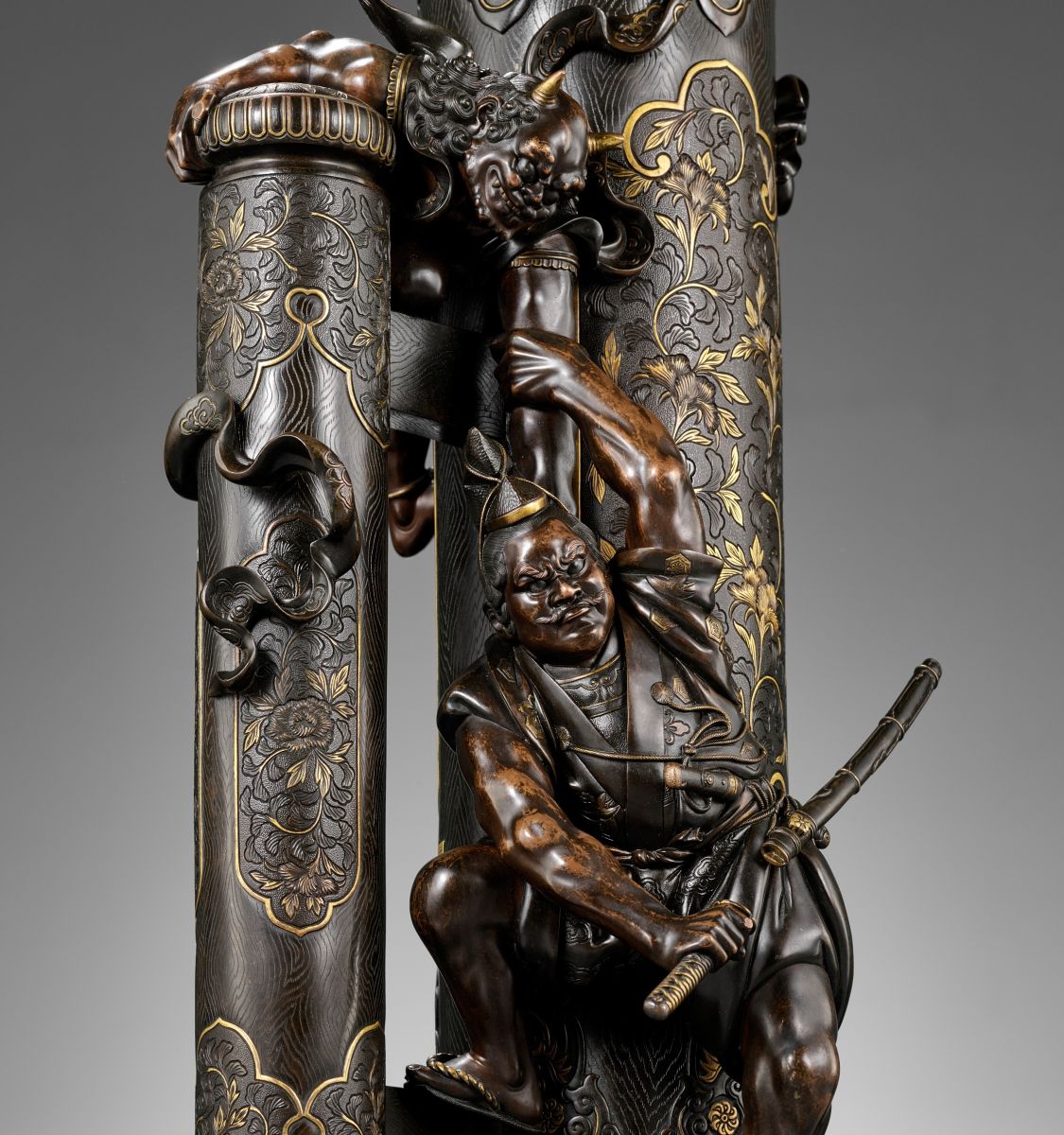 According to legend, in the late 10th century of Heian Period Japan, a notorious oni called Ibaraki-doji lived at Rashomon Gate in Kyoto. Ibaraki-doji harassed people who tried to pass through the gate until a heroic samurai named Watanabe no Tsuna went to subdue the creature.

When Tsuna arrived at Rashomon Gate, Ibaraki-doji attacked him. However, Tsuna was a strong and valiant swordsman who could defend himself against the ferocious attack. The battle raged until Tsuna drew his katana and severed the demon's arm. 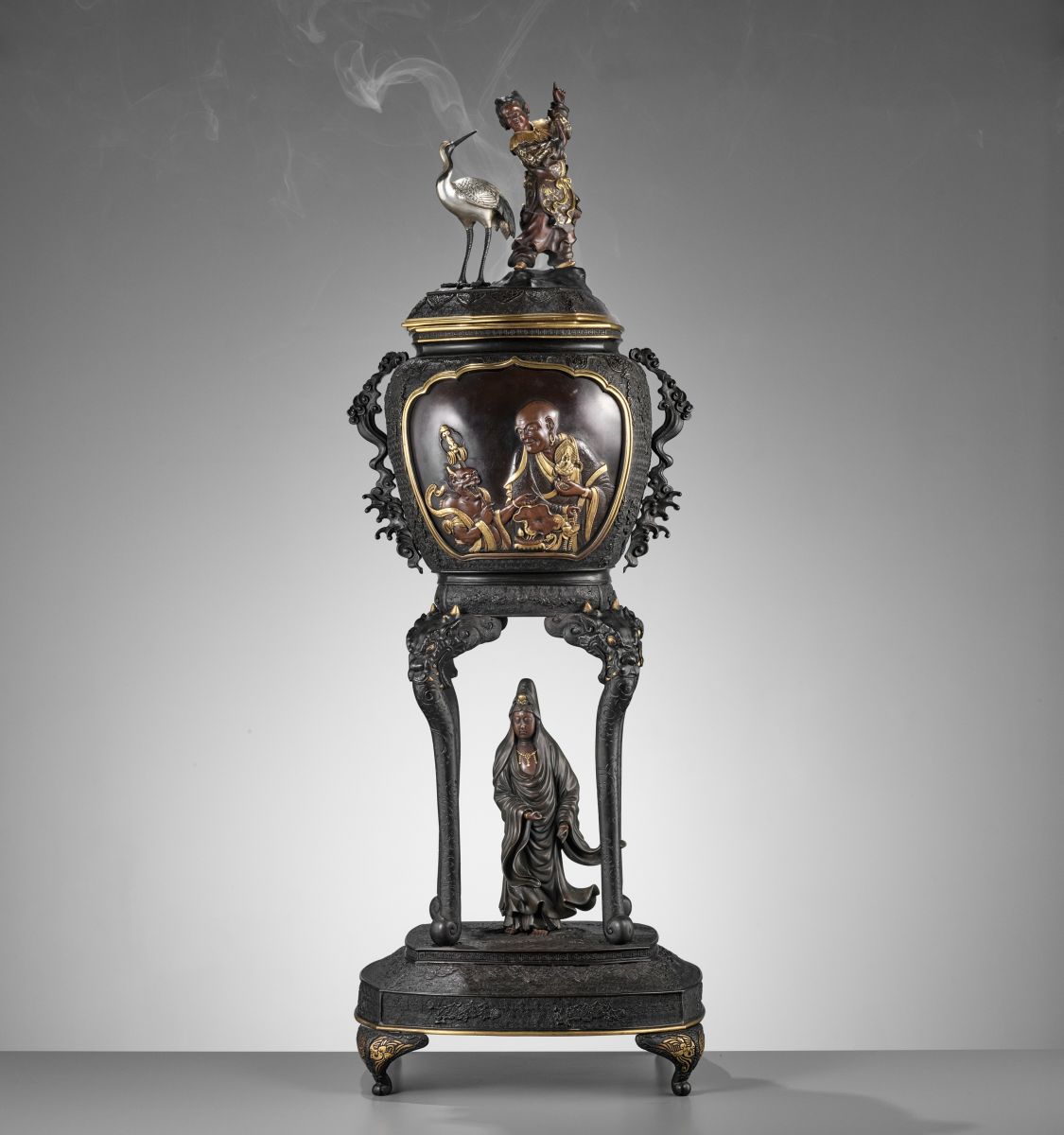 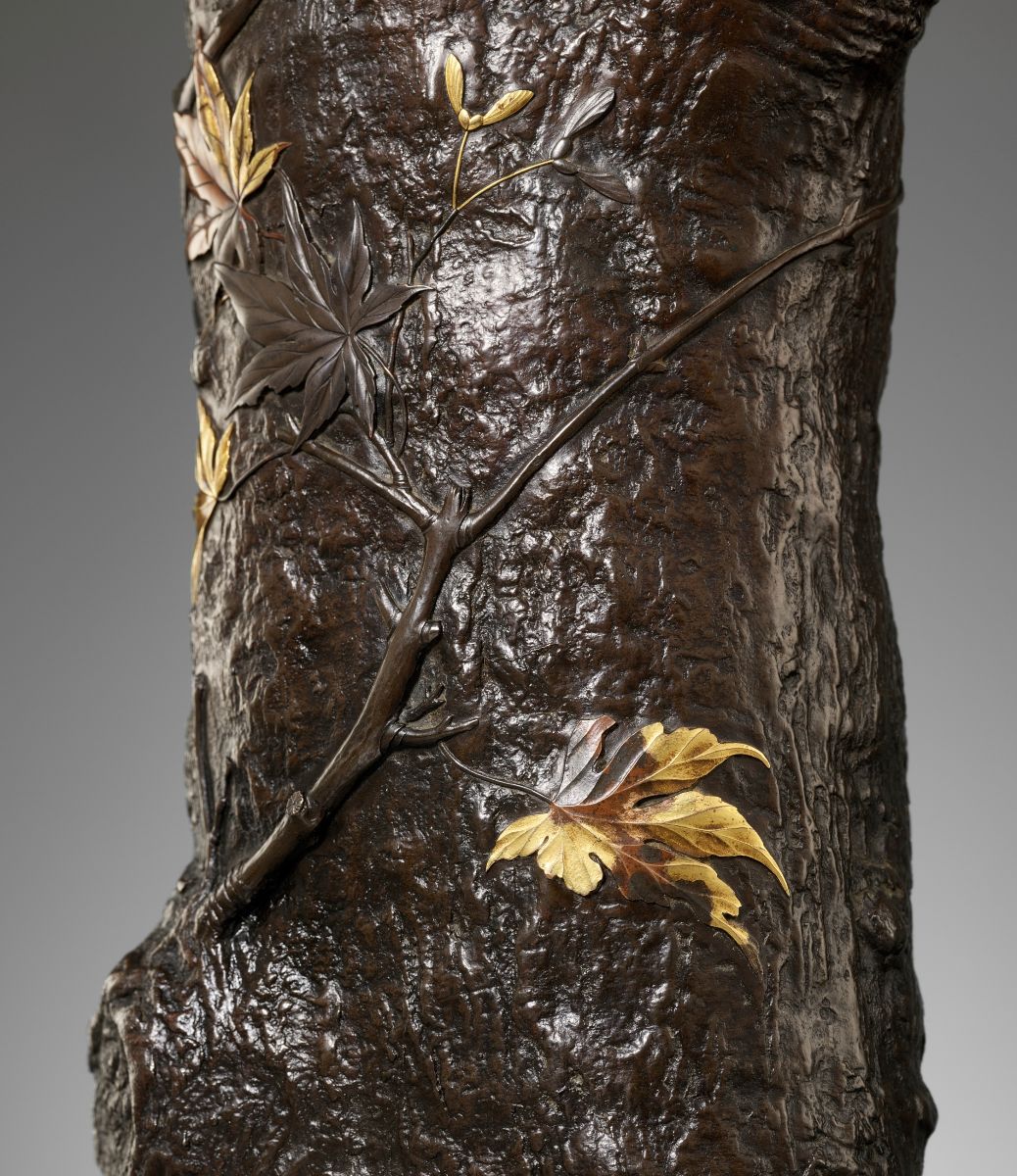 The use of patination and the superb texture of the bronze make an attribution to the workshop of Miyao Eisuke reasonable.

Lot 71: A SUPERB SHAKUDO OKIMONO DEPICTING AN AUTUMNAL SCENE OF A CROW WITH MAPLE LEAVES 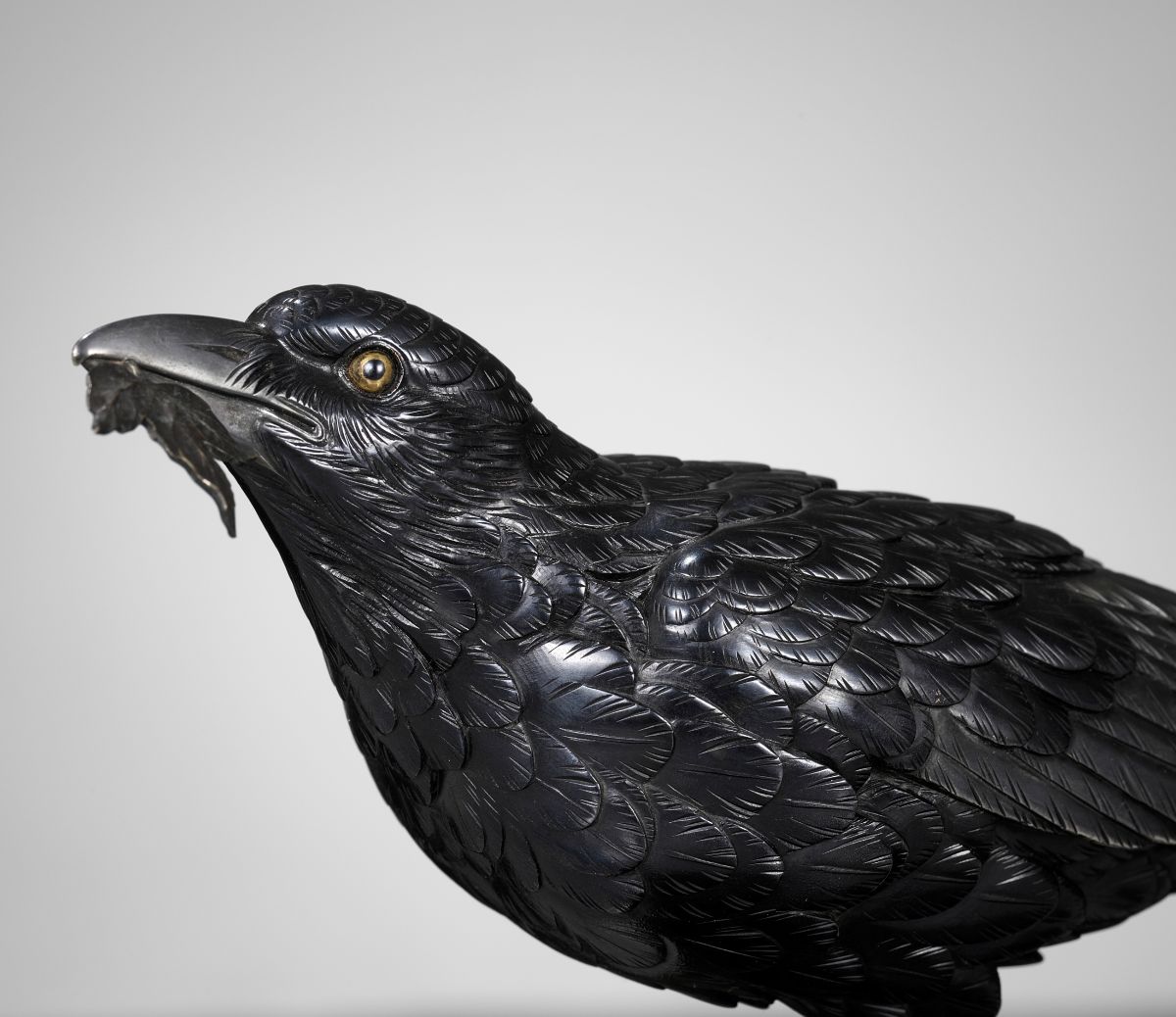 There are only a few recorded examples of Meiji metalwork depicting crows. The crow symbolizes gratitude and familial love in Japan and is a divine messenger of good omens.

Lot 84: GENRYUSAI SEIYA: A VERY LARGE AND IMPRESSIVE BRONZE OKIMONO OF AN EAGLE 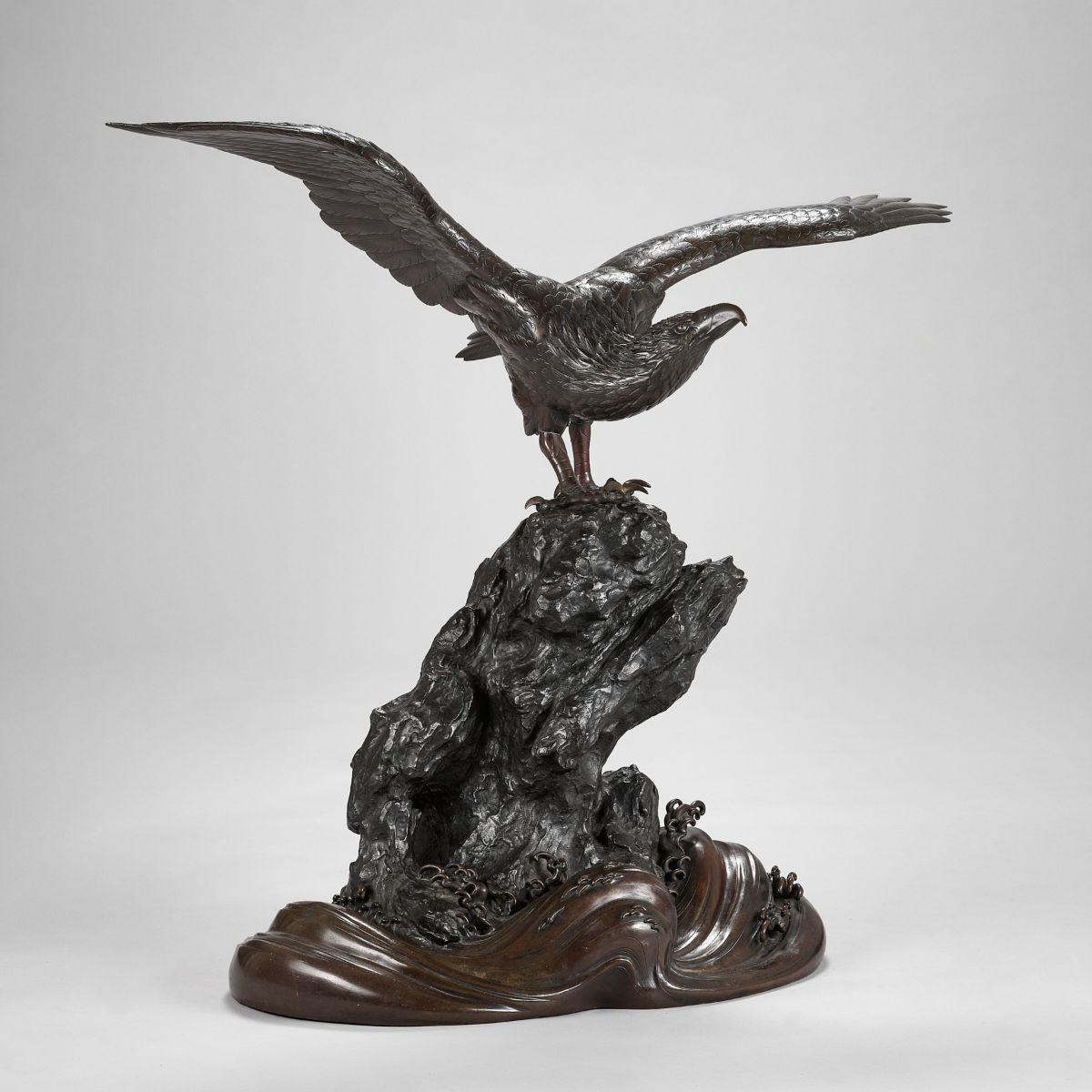 Genryusai Seiya was a master craftsman in charge of a workshop specializing in export wares of the highest quality. The present piece is a brilliant example of his naturalistic bronzes.

Lot 85: AKASOFU GYOKKO: AN IMPRESSIVE AND RARE BRONZE OKIMONO OF AN ASCENDING EAGLE 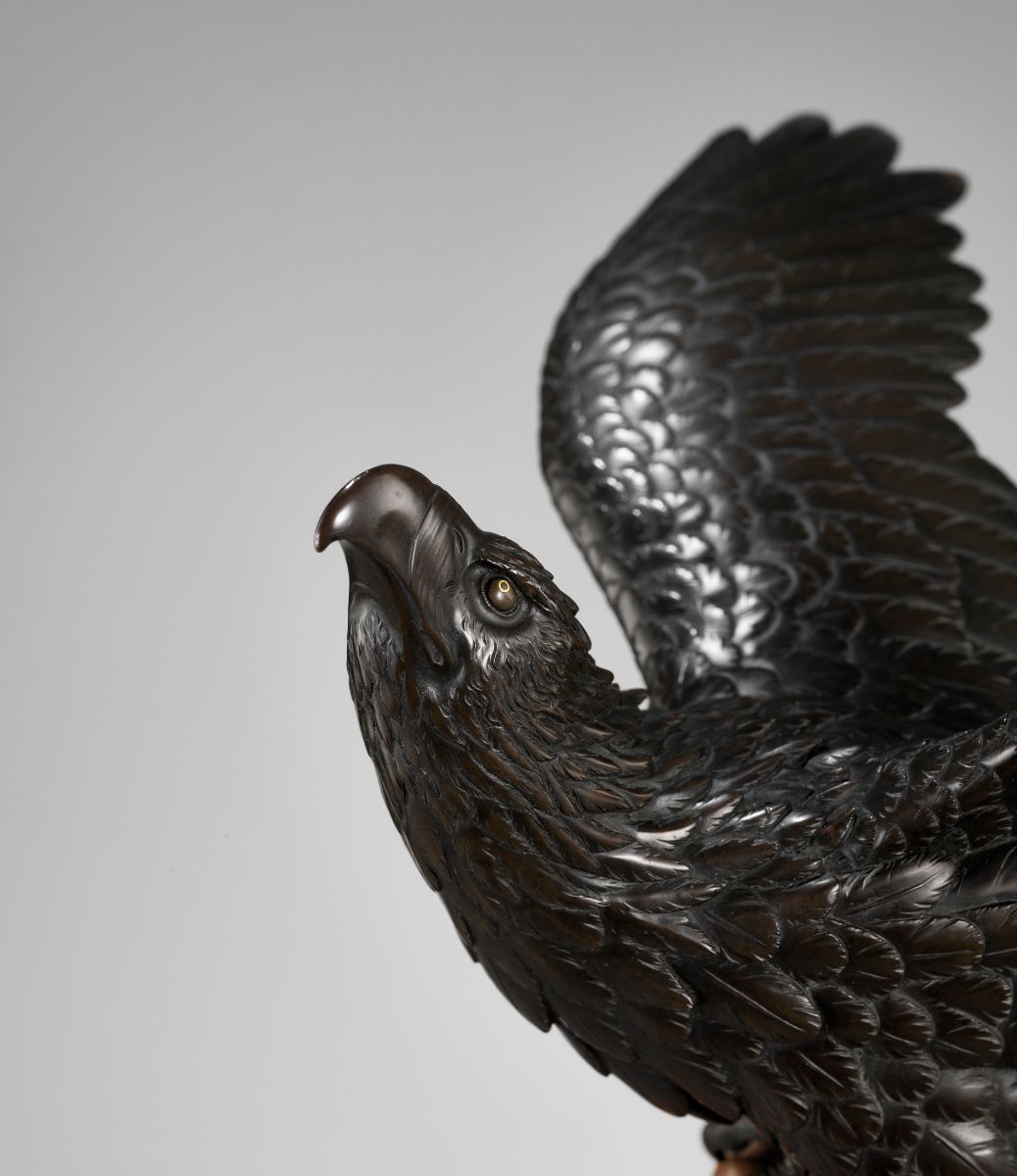 The posture of the present eagle is to be considered extremely rare. While many Meiji bronzes show various birds of prey preparing for flight, the position of the head and wings here is rather unique.